We salute the ‘Greatest Generation’ WWII tomorrow.
June 6, 1944.
I am privileged to know a few WWII…Russell S, Chuck D, Tony S.,
Anthony, all in their 90s…and my neighbor, Pete.
Here is a tidbit.
—————————————-
Pete Zarlengo, 93, remembers
Omaha Beach well — he was there in a LST-510. He has been
back to Normandy w/ his unit, and says, today, out of 168 men,
he is one of three surviving… That WWII
Landing Tank is now a Ferry from Rhode Island to Long
Island, NY. It has a plaque on the ferry, thanks to Pete
and his family, who helped overhaul this WWII vessel.
He has been interviewed by Gary Smith with Veterans
History Project and his war story is on DVD and online.
Pete has 57 kids-yes!- and will tell you that when you meet him,
seven of his own, grandkids, foster kids, and World Vision sponsorships.
He writes them every day and visits our nearby post office
regularly…

His brother, Dominic, also from the Denver orphanage, served
in WWII, however was killed in action.

Dominic was stationed in the Pacific on the USS
Alabama, which was blown up, and he is interred at the Pearl Harbor
National Cemetery. He asked me recently about transferring his brother

Another WWII Navy survivor is at Heather Gardens in Aurora CO — Chuck you recall began his service at age 16.

honor and tribute his father, Lawrence of WWI, who was in the

Calvary in France and yes, returned to Texas with his war horse. His father passed in 1940 from chemical gasses.

Both these guys can become part of the Memorial Day ‘official’

Tribute next year in Denver to honor their fallen. As I can for

Donald LePenske, Walter Machin’s half brother. Donald at 20 was

killed in action in the Pacific in 1944 in Saipan.

Liberated after several months in concentration camps, Frankl returned to Vienna, where he developed and lectured about his own approach to psychological healing. Frankl believed that people are primarily driven by a “striving to find meaning in one’s life,” and that it is this sense of meaning that enables people to overcome painful experiences. Frankl wrote his world-famous book entitled, Trotzdem Ja Zum Leben Sagen: Ein Psychologe Erlebt das Konzentrationslager (“Saying Yes to Life in Spite of Everything: A Psychologist Experiences the Concentration Camp”), known in English by the title Man’s Search for Meaning(1959 title: From Death-Camp to Existentialism).[8] In this book, he described the life of an ordinary concentration camp inmate from the objective perspective of a psychiatrist.[3][9]

After enduring the suffering in these camps, Frankl concluded that even in the most absurd, painful, and dehumanized situation, life has potential meaning and that, therefore, even suffering is meaningful. This conclusion served as a basis for his logotherapy and existential analysis, which Frankl had described before World War II. He said, “What is to give light must endure burning.”

An example of Frankl’s idea of finding meaning in the midst of extreme suffering is found in his account of an experience he had while working in the harsh conditions of the Nazi concentration camps:

We stumbled on in the darkness, over big stones and through large puddles, along the one road leading from the camp. The accompanying guards kept shouting at us and driving us with the butts of their rifles. Anyone with very sore feet supported himself on his neighbor’s arm. Hardly a word was spoken; the icy wind did not encourage talk. Hiding his mouth behind his upturned collar, the man marching next to me whispered suddenly: “If our wives could see us now! I do hope they are better off in their camps and don’t know what is happening to us.”

That brought thoughts of my own wife to mind. And as we stumbled on for miles, slipping on icy spots, supporting each other time and again, dragging one another up and onward, nothing was said, but we both knew: each of us was thinking of his wife. Occasionally I looked at the sky, where the stars were fading and the pink light of the morning was beginning to spread behind a dark bank of clouds. But my mind clung to my wife’s image, imagining it with an uncanny acuteness. I heard her answering me, saw her smile, her frank and encouraging look. Real or not, her look was then more luminous than the sun which was beginning to rise.

A thought transfixed me: for the first time in my life I saw the truth as it is set into song by so many poets, proclaimed as the final wisdom by so many thinkers. The truth – that love is the ultimate and the highest goal to which Man can aspire. Then I grasped the meaning of the greatest secret that human poetry and human thought and belief have to impart: The salvation of Man is through love and in love. I understood how a man who has nothing left in this world still may know bliss, be it only for a brief moment, in the contemplation of his beloved. In a position of utter desolation, when Man cannot express himself in positive action, when his only achievement may consist in enduring his sufferings in the right way – an honorable way – in such a position Man can, through loving contemplation of the image he carries of his beloved, achieve fulfillment. For the first time in my life I was able to understand the meaning of the words, “The angels are lost in perpetual contemplation of an infinite glory.”[10]

Frankl’s concentration camp experiences shaped both his therapeutic approach and philosophical outlook, as reflected in his seminal publications.

He often said that even within the narrow boundaries of the concentration camps he found only two races of Men to exist: decent ones and unprincipled ones. These were to be found in all classes, ethnicities, and groups. “Under such conditions, who could blame them for trying to dope themselves?” “These were the men who were employed in the gas chambers and crematoriums, and who knew very well that one day they would have to leave their enforced role of executioner and become victims themselves.”[9]

In 1946, he was appointed to run the Vienna Polyclinic of Neurology. He remained there until 1971. In 1947 he married his second wife Eleonore Katharina Schwindt. She was a practicing Catholic and the couple respected each other’s religious backgrounds, going to both church and synagogue, and celebrating Christmas and Hanukah. They had one daughter, Gabriele, who went on to become a child psychologist.[2][3][11]

In 1948, Frankl earned a Ph.D. in philosophy. His dissertation, The Unconscious God, is an examination of the relation of psychology and religion.[12] 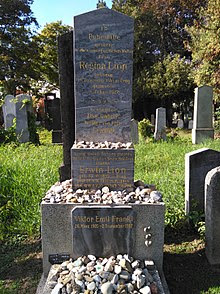 Grave of Viktor Frankl in Vienna

In 1955, he was awarded a professorship of neurology and psychiatry at the University of Vienna, and as visiting professor, he resided at Harvard University (1961), at Southern Methodist University, Dallas (1966), and at Duquesne University, Pittsburgh (1972).[4] He lectured and taught seminars all over the world and received 29 honorary doctoral degrees.[4][11] Frankl published 39 books, which were translated into as many as 40 languages.[4]

Frankl died of heart failure on 2 September 1997. He was survived by his wife Eleonore, one daughter, two grandchildren and one great-granddaughter.[14]

Frankl’s logotherapy and existential analysis is considered the third Viennese School of Psychotherapy,[4] among the broad category that comprises existentialists.[15] For Irvin Yalom, Frankl, “who has devoted his career to a study of an existential approach to therapy, has apparently concluded that the lack of meaning is the paramount existential stress. To him, existential neurosis is synonymous with a crisis of meaninglessness”.[15]

He is thought to have coined the term, Sunday neurosis. The term refers to a form of anxiety resulting from an awareness in some people of the emptiness of their lives once the working week is over.[16] Some complain of a void and a vague discontent.[15] This arises from an existential vacuum, or feeling of meaninglessness, which is a common phenomenon and is characterised by the subjective state of boredom, apathy, and emptiness. One feels cynical, lacks direction, and questions the point of most of life’s activities.[15] (see noogenic neurosis).

People without a meaning in their life are exposed to aggression, depression and addiction.[9]

Viktor Frankl once recommended that the Statue of Liberty on the East Coast of the United States be complemented by a Statue of Responsibility on the West Coast:

Freedom, however, is not the last word. Freedom is only part of the story and half of the truth. Freedom is but the negative aspect of the whole phenomenon whose positive aspect is responsibleness. In fact, freedom is in danger of degenerating into mere arbitrariness unless it is lived in terms of responsibleness. That is why I recommend that the Statue of Liberty on the East Coast be supplemented by a Statue of Responsibility on the West Coast.[17][18]  Wiki

See our WWII stories of

and more oral histories from all US wars.